I recently attended a SQL 2012 training class, and one of the coolest features that was discussed during the class was the built-in backup compression. This feature became available in SQL 2008 R2. Most people recommend it be turned on as it saves on Disk I/O , Disk Storage and backup time at the expense of some CPU and Memory usage during the backup. The best part it is it is a simple check box either at the database level or server level to enable.

I’m glad they added this feature, it has always bothered me that backing up basically text data took up so much space. 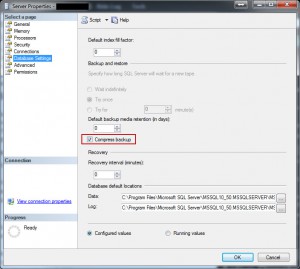 RT @KevinMarquette: My team is growing and we are adding a Senior Systems Development Engineer for Windows Infrastructure. #PowerShell http…
- Saturday Mar 21 - 2:17am

RT @Harry_Stevens: If you like bouncing balls explaining how to slow down #coronavirus, my latest story in the @washingtonpost is for you:…
- Sunday Mar 15 - 1:16pm

RT @JakeMorrison: If you have a passion for #automation and have a strong background in #Linux and #Python my team at #AWS is growing and d…
- Friday Mar 6 - 1:58am

RT @KevinMarquette: Are you looking for a Senior Systems Development Engineer role in Windows Infrastructure? https://t.co/gUlefNA9wv
- Thursday Nov 21 - 2:19am

RT @austoonz: Do you want per version, smaller, auto-loading #AWS #PowerShell cmdlets with mandatory parameters? Great news is they're now…
- Friday Aug 9 - 4:36am